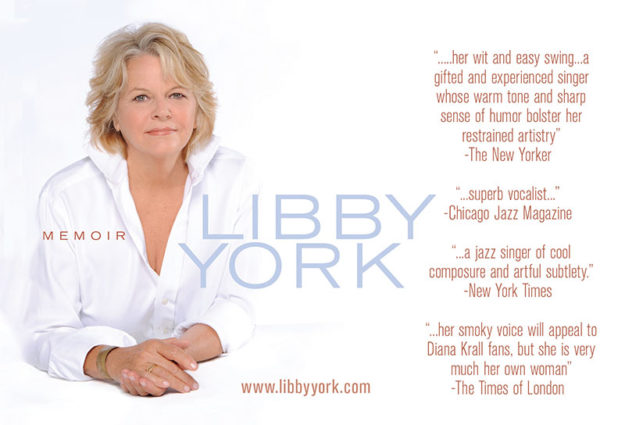 “a gifted and experienced singer whose warm tone and sharp sense of humor bolster her artistry.” The New Yorker 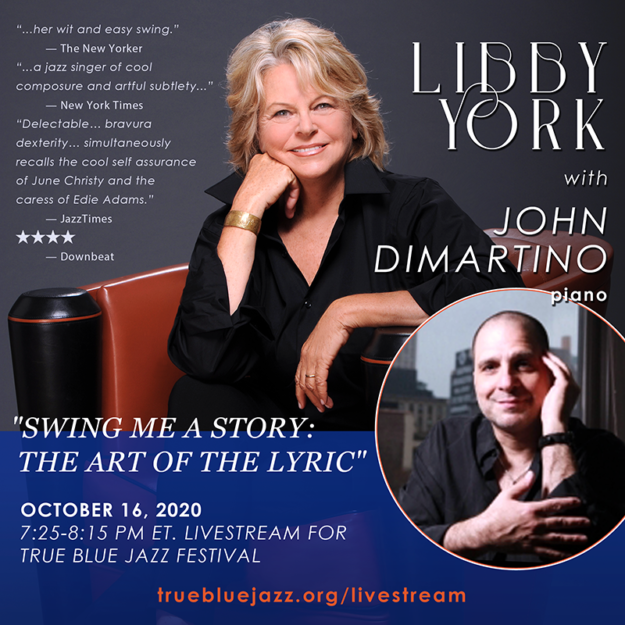 “Memoir,” Libby York’s most recent recording, is a telling reflection of a gifted and experienced singer whose subtle manner may have kept her from greater popular acclaim. A warm tone and a sharp sense of humor bolster her restrained artistry. The New Yorker

For Chicago jazz singer Libby York, many chapters and many songs

Libby York, who will be appearing this week at the Jazz Showcase, is Chicago born and bred and has carried this town with her across the globe and through the years. “Why would I ever want to shake my roots?” she says. “When I sing, I bring all of my life experiences to a song and that includes Chicago, which is always home.” 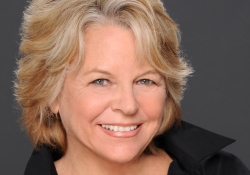 “…her wit and easy swing.” The New Yorker

“Her smokey voice will appeal to Diana Krall fans, but she is very much her own woman.” The Times of London

“Every so often a CD comes along that seems to have everything you want. Tunes and lyrics by the grand craftsmen of Tin Pan Alley, instrumental breaks by sympathetic musicians, and a singer who can interpret the GAsbook in the vocal traditions created by such as Ella, Peggy, Billie, Anita, Frank etc and yet retain his/her individuality. This is just such a disc!” Lance, Bebop Spoken Here>27 Live,
Evanston,IL 60201

“There are a lot of wonderful female vocalists on the scene today, and one of the best is LIBBY YORK.” Joe Lang, JerseyJazz

“They left the audience at the Kitano wanting more, but surely grateful for the memories.” Roark Littlefield, Stage Buddy

“Libby York is a fine singer, arranger and band leader. Her rapport with the group is so engagingly palpable you’ll wish you were in the studio absorbing their musically vibrant and positive energy live.” Eric Harabadian, Jazz Inside Magazine

“With ‘Thanks for the Memories’, the Chicago-born chanteuse has really taken ownership of this classic, and I hope it will remain one of her standards. She sings it like no one else, with all schmaltz and bonhomie long gone. What is left is a delightful, unabashedly wistful private moment with an old lover…she dazzles” Roark Littlefielfd, Stage Buddy 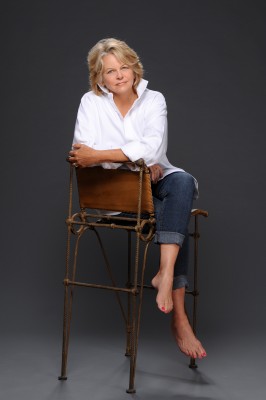 Libby York’s latest CD “Memoir” is receiving raves from jazz press worldwide. This is the fourth release from the native Chicagoan, following an auspicious Blujazz recording debut with her CD, “Sunday in New York.” John McDonough of Downbeat Magazine has awarded the recording 4 stars and says, ”Stylish and cosmopolitan, with a broad streak of lush life urbanity, Libby York has a sound that recalls, without any condescension or gratuitous nostalgia, the slightly world weary, been around the block ennui of post war Anita O’Day, Chris Connor, and Sarah Vaughn.”

“Memoir” named in the Top 10 by KCRW’s Bo Leibowitz

END_OF_DOCUMENT_TOKEN_TO_BE_REPLACED

×
Update Required To play the media you will need to either update your browser to a recent version or update your Flash plugin.